I'm very fortunate to have friends that take such beautiful photos. I personally have little interest in photography so it's fantastic to have talented people grant me permission to use their images from time to time. 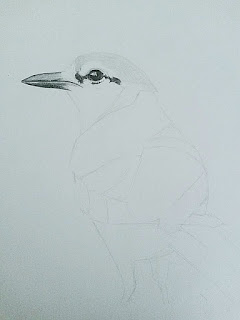 This handsome blue jay was captured under my friend Cathy Wilson's many bird feeders. I love how sharp and focused the photo is, the turn of his head, and the way his wing feathers lay over each other, reminding me of stained glass.

This is still a work in progress, but as usual I first blocked in his shape to make sure he'd fit correctly on my paper. I'm just working in my Canson 9x12" drawing pad. It's not as thick or smooth a paper as I prefer, but I'm teaching my youth class to draw animals and we're all working in our drawing pads. The paper is acid-free and that's good enough for me with this particular project. You can see my simplified lines separating distinct sections of feathers, and I've started detailing the face.

I usually tell students not to draw so dark in the early stages in case you make a mistake, but I know I've already blocked in his proportions correctly so I'm not worried. Note: I didn't draw those dark details until after several changes to the slope of the head, the size and position of the eye, and the length of the beak; it took me several attempts to get everything lined up properly. 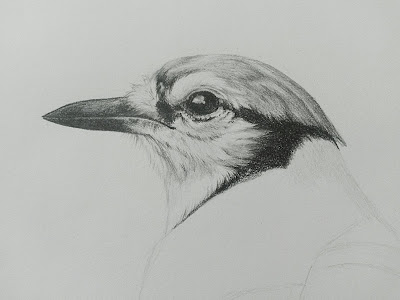 Here's the head, much closer to complete, and the rest of the body still untouched. The other reason I'm not worried about how dark I've drawn is that I've already established that these are the darkest areas in the whole picture, so I can go as dark as I want. Everything else is going to be somewhere between this and white. Likewise, I've established the whitest areas are a few spots on the face and some feather tips not shown in this image. I will continue working on the face after giving my eyes a break. 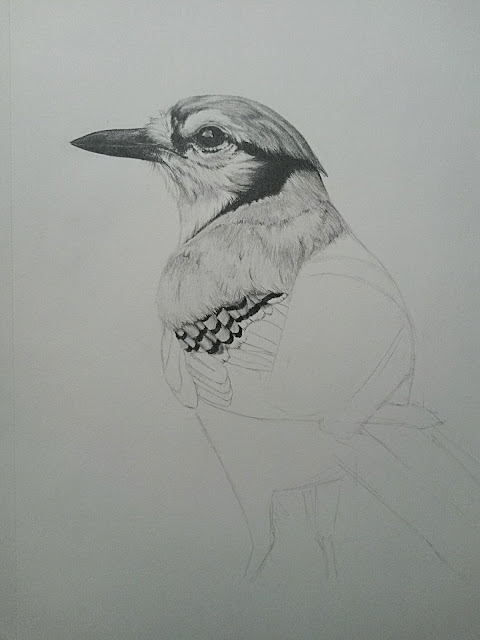 This is how far I've gotten at this point. Now you can see the bright white tips of feathers that I mentioned before. I used a combination of 4H and H pencils to draw in the textures under his chin and on his shoulders. Looking at it now I see I'll need to darken his shoulders some to match the value on the top of his head. Both of those areas are blue so they should show darker than the white patch under his chin. I think those areas are too similar at the moment. I'm using my 6B to shade in the darkest areas, but I'm defining the edges with my 3B, which is a slightly harder lead so it makes a cleaner, sharper line.

I'm also testing out Derwent's Onyx Graphite pencils. They came in a set of four (two mediums, two darks) and claim to be darker than a 9B, but so far I don't think they're even as dark as my Tombow 6B. As one reviewer noted though, the Derwent Onyx pencils performed differently on different kinds of paper, so maybe I just need to give them another chance on a different surface.

At this point, I'm considering not finishing the whole body - probably fading out on the belly, feet, and tip of the tail. The most interesting details are in his face, with his wings next. The other option is to draw him in completely and include some tufts of grass that are obscuring his feet. What do you think?

Keep Up with Email